Do the different stages of a butterfly all have the same DNA?

We put this question to Max Gray…

Max – Yes, yes they do. Any single individual of any species is going to have the same DNA throughout its entire lifespan. What changes in butterflies is, particularly between a caterpillar and an adult butterfly, is they go through metamorphosis. And during this process there’s a hormone which is found in most insects as they change from a larvae into an adult, which is called ecdysone, and that hormone triggers metamorphosis and it changes how DNA expression works.

So all of the cells within the caterpillar will start to produce different proteins and slowly that will cause a mass physiological change because the DNA is being expressed differently. It’s creating different proteins and all of the cells will change, and what triggers that, what starts the processes of hormone being released is often an environmental factor. And a lot of caterpillars, as you might know from everybody’s favourite text book “The hungry, hungry caterpillar,” it’ll happen when they’re well fed. They’ll will eat, and eat, and eat, and eat until they have enough food to be butterflies, which are basically just there to breed. The butterflies tend to live very short periods of time and most of the butterfly’s lifespan is a caterpillar.

Chris – And so the bottom line is that the DNA remains constant but, under environmental and hormonal influences, you change which genes are turned on, to what extent, and where. And that’s what drives the metamorphosis and also drives the behaviour?

Max – Yes, absolutely. And it’s true in all manner of insects. It’s not just caterpillars and butterflies. 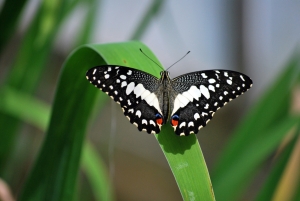 Metamorphosis of the caterpillar to a butterfly – same DNA different frequency depending on the environment and hormones (protein).